What I Thought About 7 Figure Franchise Hype 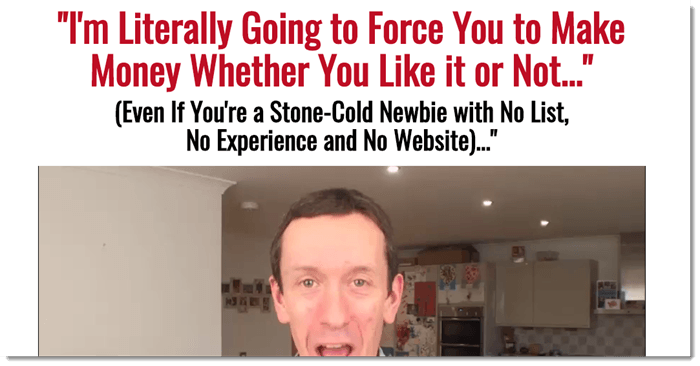 If you listen to all the hype, 7 Figure Franchise is more than just easy. Instead, it’s a program that is going to force you to make money. That’s just hyperbole, of course – but the claim is that you can earn easily, regardless of your experience or background.

So, how much of the idea is realistic and how much is simply hype? That’s what we’re going to look at in this review. Thankfully, 7 Figure Franchise gives away plenty about what the system is and how it is meant to work.

No Shortage Of Hype

The first thing you’ll notice about 7 Figure Franchise is the hype. Seriously, it’s absurd. Michael Cheney claims that he’s earned more than $1 million in the past 12 months and is giving people the ability to do the same, without effort.

He also claims that buyers get a ‘business in a box’ – one that pays $1,000 commissions. There is little information about how much you’re likely to earn. But, the site strongly implies that you’ll be making thousands of dollars soon after joining. That’s what the testimonials claim to.

Not surprisingly, there is very little evidence about whether people are actually earning. After all, testimonials are meaningless. Plenty of sellers on sites like Fiverr will give a video testimonial on a product that they’ve never even tried.

RANT: Part of what seriously pisses me off about the internet marketing industry is how far they push the boundaries of marketing. The crap they say just wouldn't fly in any other situation, but for some reason, the “make money online” people haven't gotten the message that this type of marketing is unethical.

They ride the line of fiction and reality. In big bold letters they say “John just made one million dollars using my system” and show a video of the so-called John. Then, in little tiny letters they specify that John is an actor and that 99% of people never make money with their system.

When you complain or point out the problem, they blame the buyers of the products for being idiots. “Well, you should have read the fine print”. Strongly implying that making money is going to be easy and that you'll make money quickly is simply not true, and never as been true.

As for Michael Cheney, he might earn that much money. In fact, he probably does. But honestly, that’s a moot point. Michael Cheney earns by creating products just like this and selling them. You’re not going to be doing that. You also don’t have all the contacts and marketing machinery that he has access to.

Besides, 7 Figure Franchise doesn’t copy his income method at all. It doesn’t teach people to create their own products and sales funnels, then charge large fees and overhype everything. The marketing is simply being misleading, right from the very beginning.

How You Actually Earn

With 7 Figure Franchise, you’re earning money by promoting big ticket affiliate programs, ones that Michael Cheney has created himself. These are often sold through JVZoo and have made a large number of sales.

For example, he talks about Fan Page Money Method, which I have reviewed in the past. That product promoted a way to earn through Facebook and does teach an underlying method that might work in theory. Of course, there was plenty of hype and the method wasn’t especially powerful.

In that case, the product just cost $7. But, there was a $97 and a $197 upsell, which was where the main income came from. There are plenty of other products from Michael Cheney too, such as The Commission Machine (which was a pretty good product IMO) and Scope for Cash.

In fact, Michael Cheney sells a large range of products on JVZoo and they have a tendency to promote one another. You’ll often find large sales funnels that try to get people to buy one product after the next. Many JVZoo creators simply rehash their same products over and over, giving them new names and small twists to sound fresh.

Similarly, many of his products are pretty similar.

This is also why they all follow similar patterns, including plenty of hype and various upsells. You know, the annoying stuff like “Act now and get a 90% discount. You'll never get this discount again!”

They also focus on the field of making money online, particularly on affiliate marketing. In most cases the underlying method works, it’s just not as powerful as the promotion efforts imply.

Based on the marketing, you earn 100% commissions on sales and on upsells. The promotion throughout the site makes these products sound like sure-fire winners, especially as Michael Cheney has already made a lot from them. That's not a bad commission rate! Seriously, I love when companies pay high commissions, but you have to promote good products if you want to keep those commissions and avoid refunds.

But… there are some issues.

First, much of that income came from the initial hype that surrounded the product. Once people started trying the products and reviews came out, sales would have dropped considerably. That’s largely because the reviews often aren’t positive and the products don’t tend to live up to the hype. I can see my own traffic stats from reviews, and after launch, product interest dies out considerably and never returns. Can you expect to make sales from these year-old products?

Another problem is that the programs rely on excessive hype. People who buy these systems are unlikely to use more than one, let alone actually finish one. Are you providing real value to your customers or just selling them as much as possible and praying they don't ask for a refund.

Promoting misleading and low-quality products is never a great long-term strategy. The approach can make it much more difficult to get consistent traffic. Plus, you have to rely on hype to make sales. In contrast, an appealing and reliable product will tend to sell based on its merits alone.

The other aspect of 7 Figure Franchise is what Michael Cheney calls a ‘turnkey solution’. This means that you can make money almost immediately, without needing to do any previous work yourself. All you need is the program.

But, here’s the thing — turnkey solutions never work. They don’t even make sense. It takes time to build an online business and get traction online. There is no simple way to shortcut the process.

Basically, 7 Figure Franchise is offering promotions that are already completed.

Completed promotions are nice, sure, but that’s not going to be enough on its own. You still need to generate traffic or have an existing list so that people will see the promotions in the first place. Plus, you’ve got to out-compete everyone else who has access to the same training.

And remember, anyone who purchases 7 Figure Franchise will have access to the same promotions. Your promotions aren’t going to stand out and visitors will see those promotions over and over again.

7 Figure Franchise does cover traffic generation and includes topics like social media marketing, guest post marketing and paid traffic via solo ads. Traffic generation techniques require work though. It's certainly not going to pop out of the ‘biz in a box' you just bought. Getting traffic is always a process, one that takes time, research and implementation. But, wasn’t 7 Figure Franchise meant to be turnkey? Didn’t Michael claim it would ‘force you to make money’? What happened to that idea?

Honestly, it would take you a decent amount of effort just to get through the information provided. Then you need to try and implement the techniques.

If you’re willing to do the work for getting traffic and developing a long-term business, the made-for-you promotions from 7 Figure Franchise could theoretically provide an edge, especially if they were written by an expert copywriter and they've been tested in the field. This could be a reason to consider the product!

But, there’s one more problem – the price.

This isn’t a cheap product that you can buy on the off-chance that it is useful. Instead, the full product costs $1,997. Yes, really. It costs almost $2,000. You can also pay in two payments of $1,100, which are 30 days apart. I'm sorry, but I really can't justify purchasing, or recommending that you purchase a product for two grand. I've purchased two-thousand-dollar products before and they have never been worth it. The most I've paid for a product and been satisfied with it was around $500.

Anything more than that and I feel like they are playing to your emotions, that “Well, if it's so expensive it has to be good!”

Well, I'll be straightforward here. I haven't bought 7 Figure Franchise, so can't comment on specifics of the training and value behind the curtain. However, based on what I've seen, it's not worth my two-thousand dollars, so in my opinion, it's not worth yours either. With two thousand dollars you could pick any affiliate membership website  and have about 5 years of membership. You could purchase $500 worth of content (10-20 articles per month) for four months (enough to jumpstart a new affiliate website). You could even buy a done-for-you website with original content.

Unless you really want to jump into the Make Money Online niche and promote hyped products to an audience of newbies, my advice is to go with your gut and avoid 7 Figure Franchise