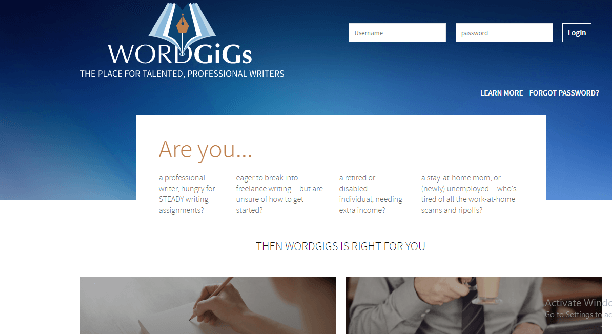 I just compiled a big list of potential websites to join from those “top 10 ways to get paid to write” lists. Apparently, some of them are quite old. Normally I'd just skip this one, but rather than waste everyone else's time signing up (like I  did), I'll just write a quick 500 word blurb and hopefully it'll save someone some time at some point. My #1 recommendation for consistent work writing is still UpWork and you can learn more about getting writing gigs here.

The site looked a little too professional. It was nice enough, but the pictures were of business people, people that belonged in a board room and not at a messy kitchen table writing on a lap top.

I didn’t get work. The site shut down in 2016 and I didn’t find this out until going through the process of signing up.

The site’s opening page reached out to writers of all sorts — the recently unemployed, those new to freelancing, professionals “hungry for STEADY writing assignments.” Pictures of professionals in ties and pant suits populated the art the opening page. And there’s the message of “hundreds of people are finding satisfaction and increased financial security as one of our paid freelance writers.”

First, most freelance writers wear pajamas – not ties and pantsuits. And the call for writers said nothing about quality, just stirred at the idea of desperation.

Still, the site said it was free to sign up. So I did. I went to the page to set up an account and… 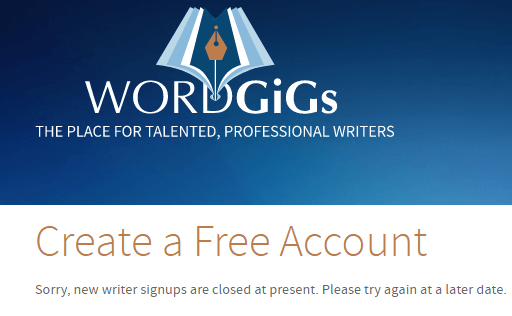 New writers, as indicated in this message from WordGigs, are not being accepted at this time.

No, of course not. They’re closed.

But WordGigs may come back. So maybe it’s worth keeping an eye out on this site.

And another thing I learned…

The image a site presents is relevant. The aim of WordGigs, according to my possibly warped interpretation, was to provide down-on-their-luck writers with a chance at boardroom legitimacy. This was clear based on the images and words used by WordGigs.

Promising entrance into a professional, corporate environment is not reality. Working freelance is not simple. The reality of the position has more to do with digging deep for jobs, getting them when you can, and moving ahead despite the difficulties. And getting better

WordGigs, should they come back, will hopefully see that and deal with reality. Freelance writing is not the golden ticket to corporate America. But being a freelance writer is not about desperation either.

WordGigs likely closed because they were out of touch. Check out my most recent review, TextBroker, to see if they faired any better. iWriter is another popular one I tried out.